Creating a modern up-to-date home, or improving a home to pull the design forwards, is nothing new. However, there is perhaps more of a focus on future-proofing a modern design. As a country, we have learned a lot from the creation of “modern” buildings in the 90’s… You have probably subconsciously noticed how a lot of the 90’s design era doesn’t seem to fit into any bracket nowadays. And this is arguably the most important factor when aiming for a contemporary motif: will you still like the overall aesthetic in years to come?

This is the answer that most designers are working with today. You see it everywhere from logos to interior design: a minimal design with as little fuss as possible is viewed to be become timeless.

The true masters of this are arguably the Scandinavian countries: perhaps a cliche, but take a look at vintage Scandinavian furniture and try to guess the age. You could be out by several decades thanks to a simple, yet very clever, no-fuss design language that they have been employing since the early 20th century.

It’s no different for windows. A busy, complicated design can either appear traditional or become quickly out-dated.

These are the important factors when designing a window that aims for both minimalism and functionalism. It is incredibly important to not take away so much that the product becomes frustrating to live with, but there are plenty of extras that can be avoided without negatively impacting the usability.

Regardless of the style you like, we strongly recommend that a home has a consistent appearance. For windows, try to keep to the smallest number of factories or at least the same country of manufacture. A lot of countries have an obvious style of window: for example, windows made in Germany tend to be tilt-turns with larger 115mm+ frame widths, and windows made in Denmark are normally flush casement with frame widths hovering around 90mm.

Combine this with an aim to line-through either glass widths or heights (normally having similar widths is very achievable), and you’ll find it’s incredibly difficult for any window to look out-of-place. 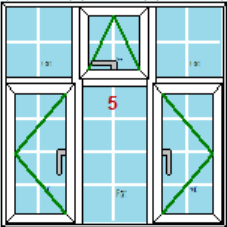 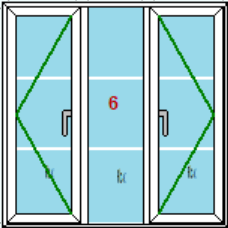 You’ll start spotting these everywhere once you’re aware of them… One of the benefits of choosing a flush-casement system is that these external hoods can normally be completely hidden – this really helps with an overall clean design of a home. 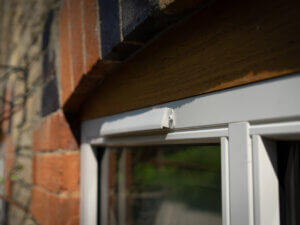 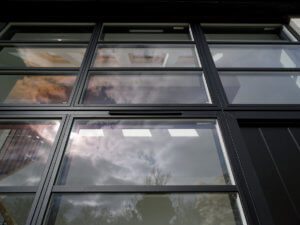 See more in our Window and Door Upgrades for a Home near Banbury gallery.

The Danish are very confused by these, and a final order from us rarely includes them. It initially took us a very long time to explain what our UK customers wanted to our Danish estimators and, even after showing them their own windows fully finished and installed, the Danish verdict was “nice, but strange”. There’s a traditional Danish window layout called “Dannebrog” – this is a similar idea, but implemented very differently…

Essentially, fanlights are an old UK plastic phenomenon that never truly went away. Yes, they provide a small amount of ventilation without needing to open a whole window. And, if you’ve always opened your windows in this way, it can be initially strange to not have them.

Arguably, the main reason why Danish homes (and now a lot of UK homes) feel they aren’t needed is because a larger side-hinged window can actually be locked in a ventilation position. And it’s quite easy for the same window to hold itself in a open position if you need more airflow.

For this relatively small compromise, I believe the aesthetic improvement is very much worth seriously considering. 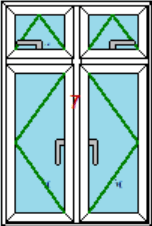 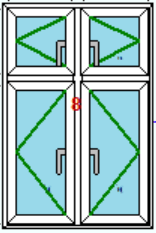 A lot of timber windows have an option where the interior frames can be given a classical moulding around the edges. If this doesn’t compliment the interior design you’re aiming for, we usually recommend a clean 90 degree angle on all frames. 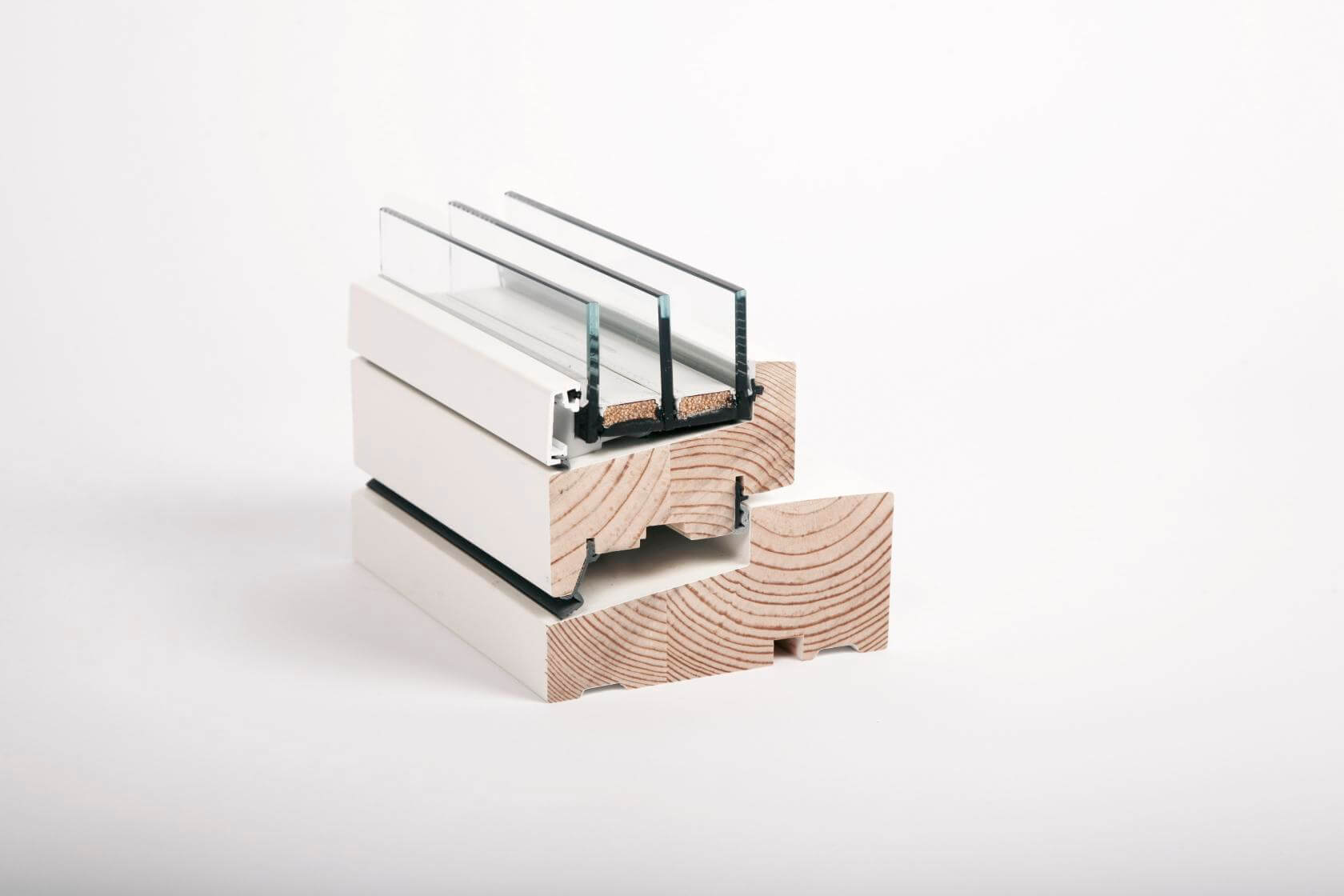 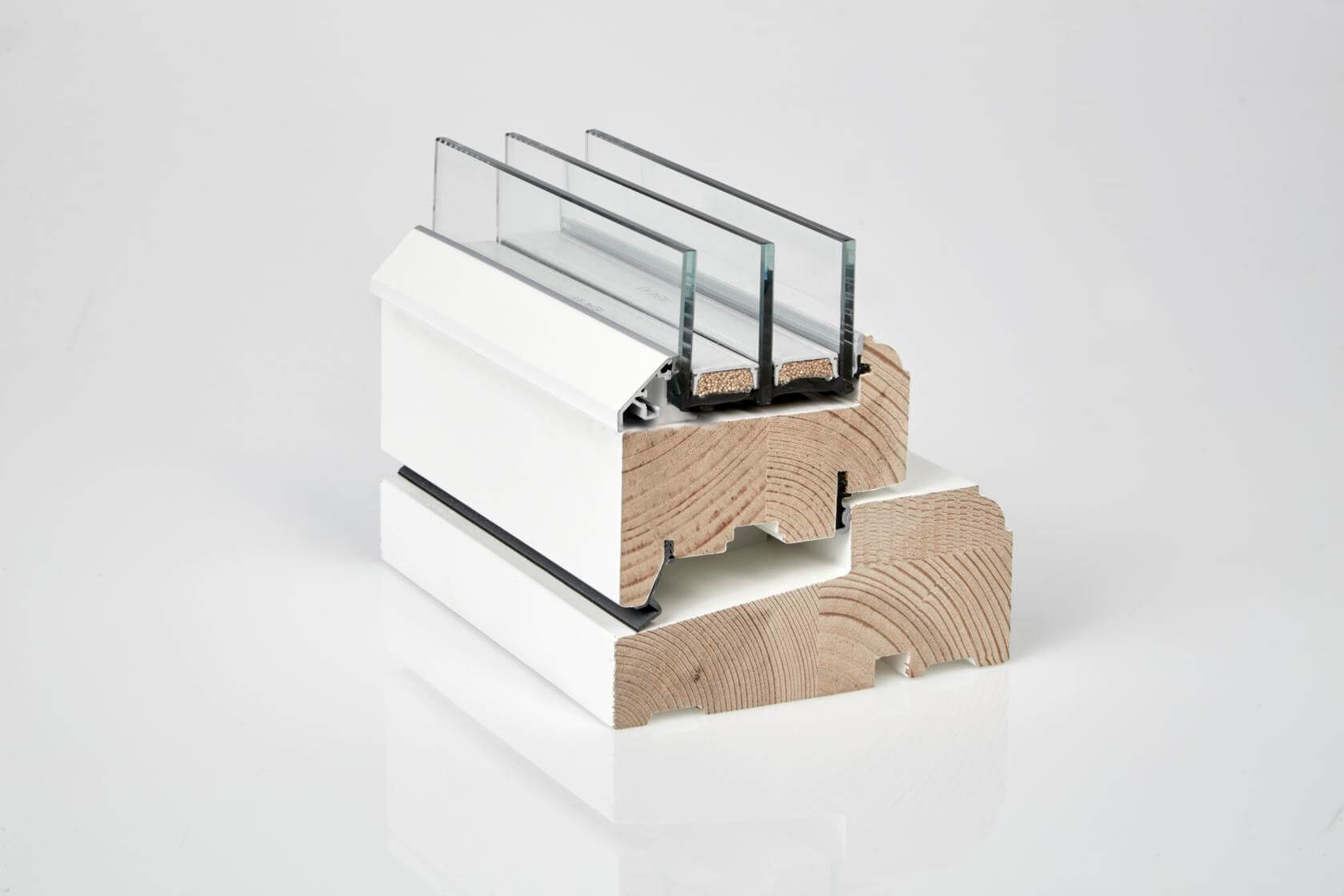 There tends to be a lot of choice around visible hinges: a “normal” Danish style would be galvanised steel, but this is something we’re really not used to seeing in the UK, so they can look strange on some builds.

The stainless steel or darker grey equivalents can look much better. And a matching powder-coated hinge can be barely noticeable against the frames.

For a completely flush and minimal solution, guided hinges are completely invisible. They can present some practical issues though, as fire egress is often compromised due to the window sliding slightly into the clear space as it opens – best to ask if you’re unsure based on your window sizes. 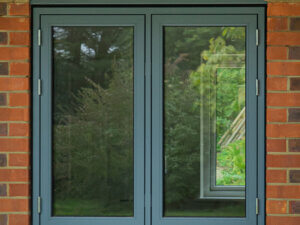 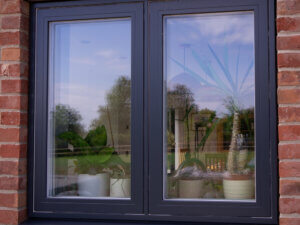 The extreme examples are comparing a German tilt-turn product with a UK-made heritage aluminium option.
A triple glazed heritage aluminium frame will just about be able to achieve an overall Uw value of 1.4W/m2k when paired with high performance triple glazing.
And the much thicker German composite solution can easily achieve a Uw of 1.2W/m2k with a very normal argon-filled double glazed unit (and can reach 0.78W/m2k with triple glazing).
Obviously, the material plays an important role here too, but it still does make sense to compare them, as you’ll find that almost all thinner frames are aluminium and thicker frames are primarily timber.

For most people and most projects, there lies a convenient middle-ground where frame thickness and insulation feel “just right”. For us, this position is held by our Danish ranges – they quickly became the most popular choice when we first introduced them to the UK.

Vrogum Rosenholm, Rationel Aura and Forma and STM Sapino and Tinium are all worth an explore. All have a frame thickness of around 90mm for an opener, and all can achieve Uw values below 1.0W/m2k.

For a modern UK home, our Danish ranges arguably offer the best combination of price, performance and minimalist frame profile – take a look at some examples below: 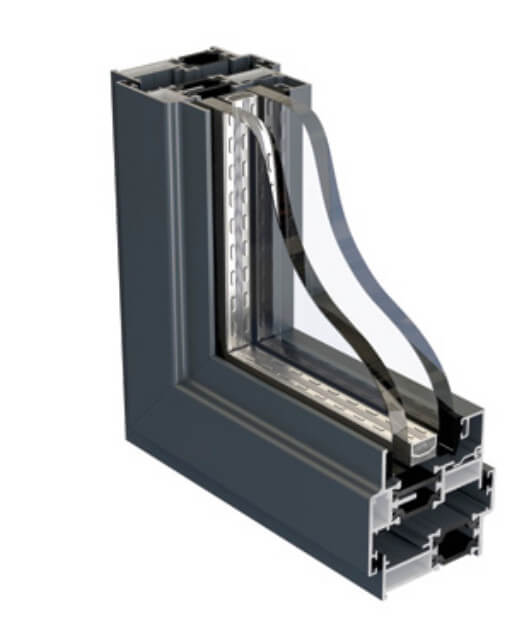 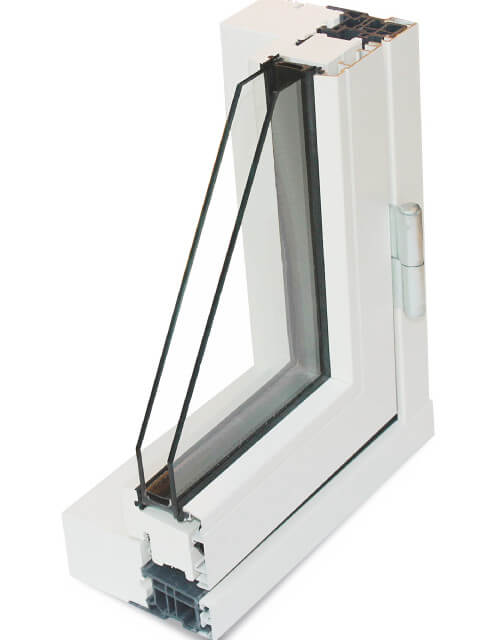 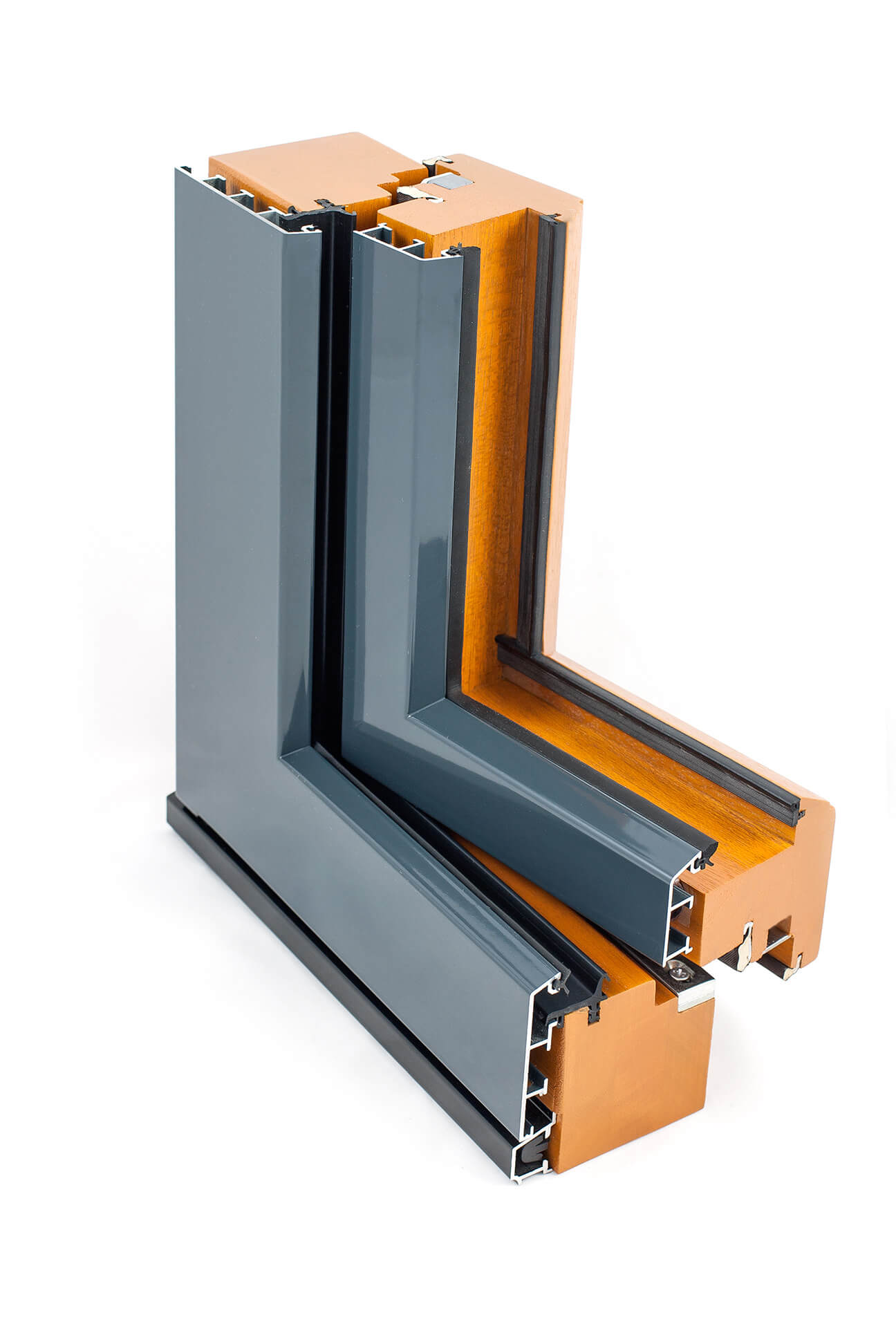 Looking for inspiration about your new windows? Below are some of our most recent modern style project galleries. 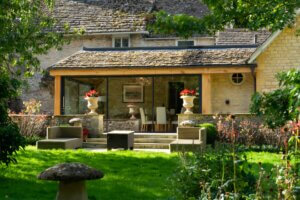 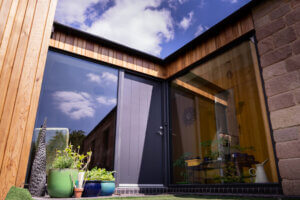 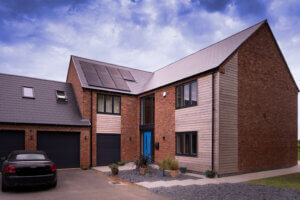 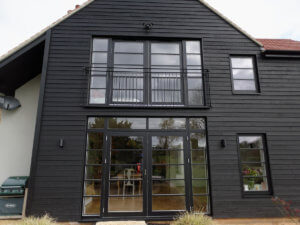 Window and Door Upgrades for a Home near Banbury

For any questions about our products and services, or to get your quote,
please get in touch by phone, email, or using our in-browser contact form!

We are fully open and operating as normally as possible! 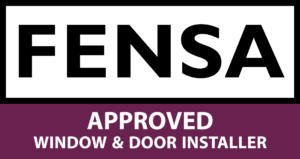